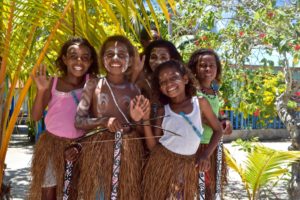 The island of New Guinea, including both the country Papua New Guinea and the Indonesian provinces, has 15% of all the world’s known languages. Papua is home to 307 local languages, but almost everybody speaks Indonesian. For many people, Indonesian is a second language, but in some areas, like Raja Ampat, children learn Indonesian first.

Papuan pronunciation is distinctive. In standard Indonesian, the letter e has two pronunciations: most commonly, the letter e is very short sound as in terima, selamat, and sekolah; less commonly, the e has a stronger sound (written below with a upper case letter) as in sorE, Ejaan, dEsa, and bEcak. In Papua, the e always has the strong pronunciation, so they say tErima, sElamat, sEkolah. Also Papuan pronounces ng as n. So the word “bintang” sounds like “bintan”.

Pronouns in the Papuan colloquial are non-standard, as shown in the table below.

Papuans not only shorten the pronouns, but they also have a different way to express possession. In standard Indonesian, we use suffixes like –nya, -ku, -mu. In Papua, they use the pronoun and pu (for punya).For example for Ibunya sudah pergi (Her mother has already gone), Papuans say de pu mama so pergi. Here are some more examples.

Papuans barely use prefix “me-“. Instead they replace it with kasi. For example:

There are some words that are only used in Papua. For example:

Most Papuans understand standard Indonesian perfectly well, but in order to understand Papuan’s speech, other Indonesians and foreigners need to know these differences.