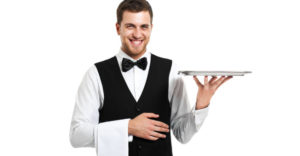 Tipping rules vary from one culture to another, and the U.S. has its own way. Coming from a culture where tipping is less demanding, American tipping norm is something new for me. In fact, my first culture shock in the U.S. was when I received a bill with tip calculator telling me how much to tip based on my meal purchase. In general, Americans tip servers in restaurants between 15 to 20 percent of their meal, and not giving a tip is considered rude, even it is seen as bad as robbing the server because they do not get paid much. The question is why Americans feel very obligatory in giving tips to a server? Although many people think that good service is the main reason for costumers to tip, studies reveals that the feeling of guilt is the primary cause of high tipping.

Taylor Smith, a server in a restaurant in Boulder, Colorado, argues that customers tip because they get good service from the servers. She thinks that the customers will tip more if the server does a good job and vice versa. She further explains that young people like herself tend to tip less than older people because they normally do not have much money. After all, she believes that tipping involves a lot of human psychology. Everyone wants different service, and they have different criteria what a good service is so their tips will vary regardless of the server’s performance.

However, Michael Lynn, a professor at Cornell’s School of Hotel Administration and a former waiter at Pizza Hut, has another explanation. Americans tip servers because they feel guilty about having people wait on them. His theory, which is also an idea introduced by anthropologist George Foster, works when Americans are having more fun than a person who serves them. Servers in a restaurant or in a bar is a good example. They are busy working while the costumers are enjoying the meal they serve.  This theory reveals why Americans do not tip in shop clerks or post officers simply because the costumers are not having more fun than the servers.

In his studies, Lynn also found that good service and high tipping have a weak relationship, that is, customers do not give good tip to servers just because they get good service. He further explains that the quality of serving has the same effect with what the weather looks like and how the customers feel that day. Even if a server makes a mistake like spilling water on the costumer’s table, he will still likely get tip of at least 15 % of the meal purchase.

Tipping is unpredictable. The common sense is that the better quality of the service, the higher tips they will get. Although this fact is true to a certain degree, according to the studies, quality of the service is not comparable with feeling of guilty. A very important takeaway from the studies is that servers should always do their jobs at their best and be grateful when they get high tips. On the other hand, they should not be discouraged when they gain low tips because it does not necessarily mean that they provide poor service.